My first memory of Florence is a rather hazy, golden dream. I remember that when my family got there I was exhausted, but that stepping out into the pink and gold tinged streets of the city gave me new life. At some point in the evening, I remember that we stumbled upon an orchestra performing near the Ponte Vecchio and I knew that I had fallen head over heels in love with the city. Several days later, as my family’s time in Florence was coming to an end, I made sure to rub the nose of the Bronze Boar statue which, according to legend, guarantees your return. Four years later, I proved the legend right as I have come back, only this time sharing the adventure with two friends.

I was determined to make this year’s Florence experience as magical for Mary and Catey as my first visit had been for me. Unfortunately, the trip didn’t get off to a great start. As I mentioned my last blog, we missed our train from Rome to Florence. Thus, we had to buy second-class tickets for a three hour train ride and, to make matters worse, we actually ending up getting off at the wrong stop and had to catch another train ten minutes later. All of this resulted in us getting to Florence very late and eating a dinner that was good but way overpriced. So…not really the magical first day I had envisioned. But I shouldn’t have worried too much, because the next day was almost as perfect as I was hoping for.

The next morning we had a delicious and cheap breakfast at a little cafe called ‘Caffe Rosano” (a croissant and a freshly squeezed o.j. for 4.5 euros). Then we headed to the Galleria Academia to pay a visit to Michelangelo’s David. I had bought tickets before hand so we had to get there a little early to exchange our vouchers for the tickets.

The gallery is, in my opinion, the perfect size for a museum. It only takes about an hour and a half to see everything and, especially with the David, you feel like you get your money’s worth. The David is very impressive (I think Catey might be in love). The details in just the hands of the David are absolutely incredible, you can even see the veins. Definitely a ‘must-see’ of you get the opportunity.

Quick note: Seeing the David during the off-season was actually a lot better than seeing it during the summer, because in the summer the museum is extremely crowded.

After our wanderings through the museum, we got a quick sandwich to go at a little shop called ‘Sandwichic.’ The guys behind the counter were super helpful and gave us each a button for good luck as we left. The sandwiches were absolutely delicious and we ate them on the curb of the Piazza Della Signoria while fending off pigeons.

After lunch, we made a quick stop at the Ponte Vecchio, took some lovely photos and headed to the Pitti Palace. I had only given us two and a half hours for the entire palace, because I forgot how large it really is. Unfortunately, even with the Museum of Fashion and Costume closed, we didn’t see everything. I had originally planned to take a quick tour of the Boboli gardens, but both Mary and Catey were pretty tired so we headed to a coffee shop instead. After being reinvigorated with caffeine, we headed to the Piazza Michelangelo to watch the sunset. Now, I don’t mean to toot my own horn, but watching the sunset from that hill was a great idea. The entire city of Florence turned gold and pink in the sunset and right behind us a street musician played beautiful songs on his guitar. We even saw a professional model shoot happen right below us. I felt the same magically beauty that had originally made me love Florence, and this time Catey and Mary could experience it as well. 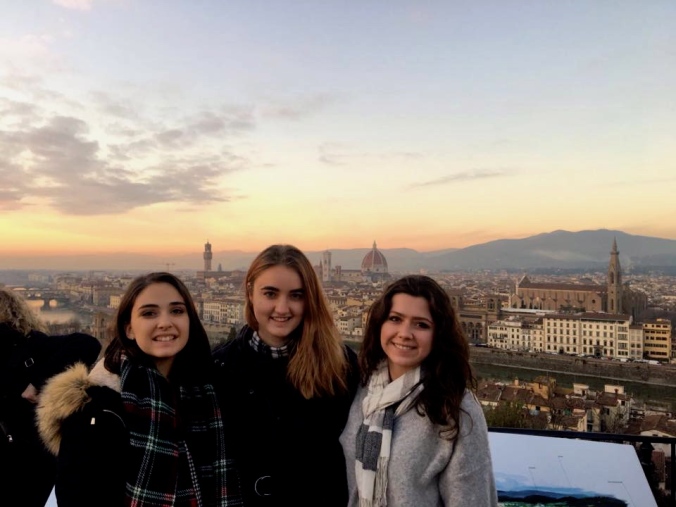 After climbing down from Piazza Michelangelo, we headed to the Santa Croce where both Michelangelo and Galileo are buried. Unfortunately, the church was closed by the time we got there, so we spent the evening exploring the Christmas market nearby. For dinner, we headed to a restaurant named ‘La Fettunta.’ I split a lasagna and an eggplant parmesan with Catey. Both were absolutely scrumptious. After dinner, we headed to a nearby gelato shop to meet up with an old friend of mine from Denmark named Natascha, who just happened to be studying in Florence when we were there. The gelato was pretty subpar for the normally delicious florintine gelato, but sitting in a warm room, surrounded by friends and catching up is always a nice way to spend an evening.

The next day, didn’t go as smoothly as I had planned unfortunately. I had bought tickets for us to se Il Duomo at 10:00. They were supposed to be ‘skip the line’ tickets, but we ended up standing in line for about half an hour anyways. As we were nearing the front of the queue, I noticed that some people with tickets that looked similar to ours were being turned away. I asked the couple in front of us what was going on and they told me that not only did you need a ticket, but you needed a reservation as well. I was pretty confused because I had bought the tickets for a specific time, and had the physical copies of the tickets with me. But when I showed them to the security guy, he told me that because we didn’t have reservation we couldn’t enter. I was starting to get a little frustrated by this point, but we made our way to the ticket office in the museum to figure out the problem. It turns out the company I bought the tickets from sent me an email with two separate links–one for the tickets and one for the reservation–and wrote that I only needed to print one or the other to enter, when in reality, I needed both. After figuring out the problem we went back to the guard and he finally let us into Il Duomo. The moral of the story kids–always print out every link from a ticket website because it’s better to be safe than sorry.

I forgot how long the climb is to the top of Il Duomo and Catey and Mary were pretty tired of stairs by the time we got to the roof. The view, however is definitely worth the climb. 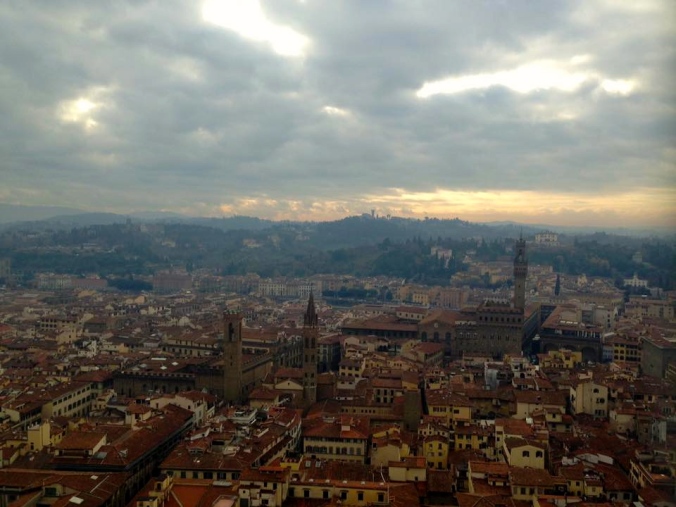 After walking around the Duomo museum for awhile we met up with Natascha had an amazing lunch at Toscini Panini (6€). If you get the opportunity definitely eat there! You’re allowed to sample all the different meats and cheeses before choosing the ingredients for your sandwich and all the employees are very nice. 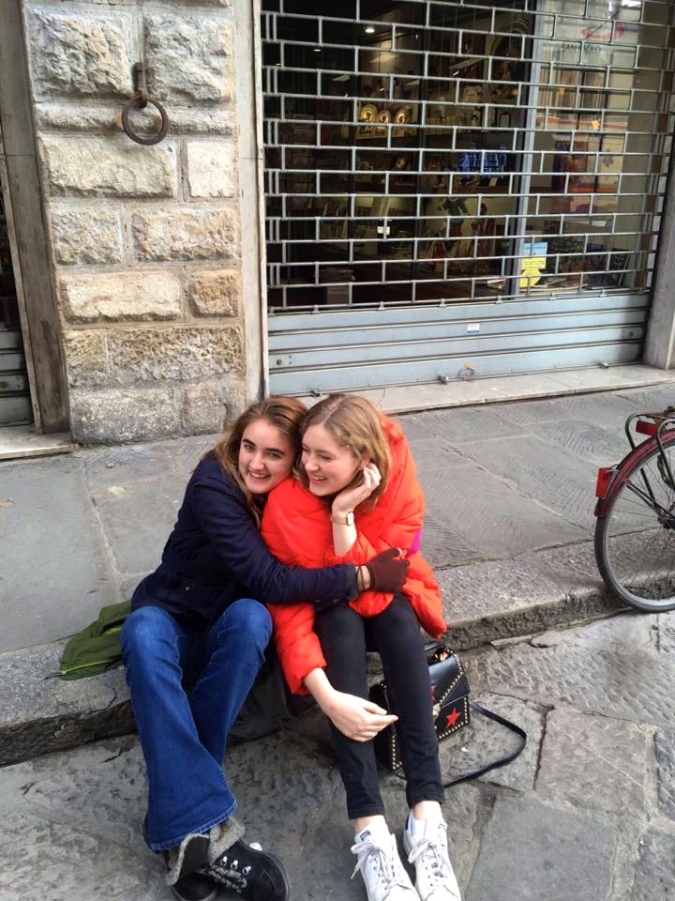 Right after eating a delicious sandwich, I felt the overwhelming desire to hug my Danish friend, a.k.a. Natascha

After lunch, we grabbed a quick gelato (Florence gelato is the best), and headed to the Uffizi gallery to spend the afternoon looking at art. Unfortunately, there was another mix up with the tickets (although this time it was entirely my fault). Somehow I had bought tickets for the 5th and the 7th but not the 6th, which was the correct date. So yeah…another piece of advice would be to always triple check your ticket dates before buying them. I bought some more tickets and we headed inside. The museum itself is quite large and beautiful. We saw Botticelli’s ‘Venus’ and many other stunning paintings, but unfortunately I think we were rather museumed-out by the end.

We left a little earlier than planned and headed to the laundry mat to wash our clothes. For dinner, we headed to a small, Chinese-food restaurant. We had all been craving Chinese food because, as good as Asturian food is back in Oviedo, they don’t have a lot of good international restaurants. Thus, we ended our final night in Florence eating delicious fried rice, spring rolls, and in my case, sweet and sour chicken.

The next morning, we got to the train station extra early to make sure we didn’t miss our train this time. It was hard to say goodbye to Florence yet again, but I know I’ll be back because I paid a dear old friend a visit.

One thought on “Sunsets in Florence”